On 13th and 14th April a Factory Acceptance Test has been conducted on the double cylinder wheelset press manufactured by BBM for the Taipei Circular Line.

The customer delegation composed by two engineers from the Department Of Rapid Transit System of Taipei Municipal Government (the final customer) and two engineers from Ansaldo STS (the main contractor) were welcomed at our main plant.

The machine passed all the 25 tests conducted and the customer congratulated BBM for the professionality shown by the entire team.

This is another great success of BBM in the Taiwanese market where we carried off a complete depot for THSRC, another double cylinder press for the Tucheng Metro Taipei depot and where a single cylinder press now in production will be installed for the Taichung Metropolitan Mass Rapid Transit System.

The press for the Circular Line will now be disassembled and prepared for the shipment to the final assembly location. 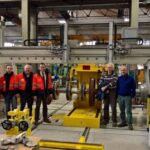 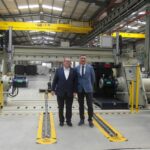 By using the site, you accept the use of cookies on our part. more information